The futuristic Las Vegas Monorail opened on December 24, 2004 ...its seven stations connecting the major Strip resorts. (Previously the monorail only stopped at Bally’s and the MGM Grand.) It was supposed to open early in 2004 but mechanical problems caused a delay of several months. The privately-funded monorail system is owned and operated by the non-profit Las Vegas Monorail Company.

A route google map of the monorail can be found here. The new trains operate every 5 to 10 minutes (depending on the number of trains in operation) 7 days a week from 7 a.m. until 2 a.m. (3:a.m. in Fri., Sat. & Sun.) (until midnight on Monday) and make the entire run in about every 4-8 minutes. It is by far the fastest way to travel up and down the strip. The "Deuce" bus can take an hour due to their many stops and traffic.

Hint! Take the Deuce strip bus – rather than the monorail – if you want to go to the downtown area. The monorail does not go downtown.

The high-tech $650 million transportation system consists of up to nine air-conditioned trains of four cars ...each running on a single rail. Each train will seat 72 passengers with standing room for an additional 152 riders. It travels at a top speed of 50 mph and travels behind the hotels parallel to the east Las Vegas Strip corridor. Plans are to eventually extend the monorail into downtown on the North and to the airport on the South.

There are 3 types of tickets available to visitors. A single ride fare costs: $5; a one day unlimited ride pass costs $12.00; a three day pass costs: $22.00; a four days pass costs: $36; a five days pass costs: $43; a seven day pass costs: $56. Children 5 and under ride free! All tickets may be purchased at ticket vending machines (TVM) located inside each monorail station or online. The Unlimited Three-Day Pass expires 72 hours from first use during operational hours. TVMs accept cash and all major credit cards.

Parties of 12 or more can email to sales@lvmonorail.com for discounted group rates.

This map not only shows the Las Vegas Monorail route, but also the other trams that operate in Las Vegas.

There are three other trams in Las Vegas that run on the west side of the strip. Unlike the Monorail, these trams are free.

(1.) The Bellagio Hotel to City Center to Monte Carlo Hotel tram links the center and South Strip. It makes a run every ten minutes, twenty hours a day (8 a.m. to 4 a.m.) At the Bellagio, you’ll find the indoor boarding platform near the front desk (hotel lobby) and Conservatory (botanical garden). It's near the "Street of Dreams" shops at the Monte Carlo. It is located at Crystal's Shopping, Dining and Nightlife area at City Center near the Aria hotel.

(3.) The Excalibur Hotel to Luxor Hotel to Mandalay Bay Hotel tram runs in the South Strip every 5 minutes. Operates Monday to Thursday 7:00 a.m. to 2:00 a.m. (And 7:00 a.m. to 3:00 a.m. Friday to Sunday) from stations in front of these hotels. It runs non-stop thec vbetween Excalibur and Mandalay Bay southbound, but stops at all three hotels northbound. 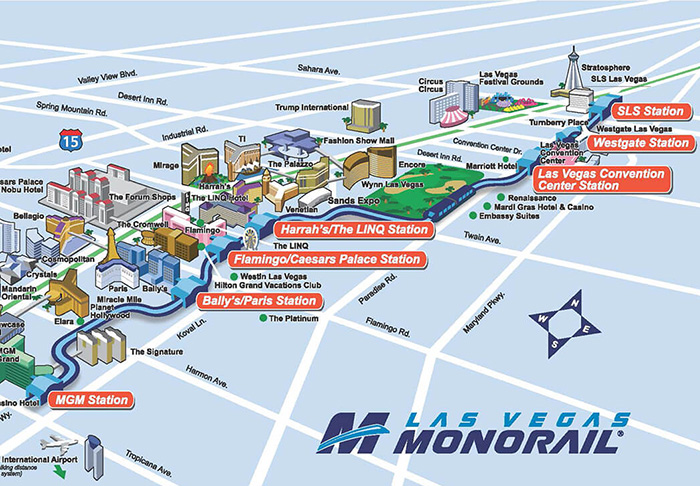